The War of the Rosens 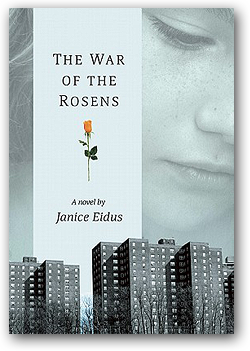 Winner of an Independent Book Award

The War of the Rosens, set in 1965, is about an eccentric Jewish family in the Bronx in which the sibling rivalry between two young sisters—one of whom is seriously ill—reaches a danger point, forcing each family member to face the limitations and complexities of love and faith.

“Eidus is a camouflage artist. Her sparkling novel has a dark underside, while beams of light struggle to break through the gray pall over this complex coming-of-age novel. It’s 1965, and the unhappy Rosens live in the projects in the Bronx along with a diverse array of other Jewish families. Hot-tempered Leo, who runs a humble candy store, is a rabid atheist who tries to inoculate his two daughters against religion. His meek wife, a migraine-prone drudge with a predilection for Doom and Gloom tows the line, but May, 13 and burdened with a lazy eye, regularly beseeches God and longs for glamour and romance. Precocious 10-year-old Emma is a budding poet drawn to the Virgin Mary and deeply concerned about what it means to be a bad or good Jew. As the Rosens are cruelly tested, Eidus works out a calculus of guilt, fear, and love. Grim and incisive, caustically humorous, and affecting, Eidus’s drama of moral reckoning is rendered with barbed detail to yield what Leo calls ‘The Truth With a Capitol T.’"
—Donna Seaman, Booklist

“Janice Eidus's writing is intensely moving and fiercely intelligent. With bittersweet humor, and without sentimentality or nostalgia, she eloquently evokes the diverse voices of the adults and children of the colorful, eccentric Rosen family. She vividly captures not only the world of the Bronx in the mid-sixties, but also the world of one Jewish family struggling to survive in a harsh world charged with beauty and possibility.”
—Vivian Gornick, author of Fierce Attachments

“In Eidus's confident fifth book, it's 1965, and 10-year-old cutie-pie Emma Rosen is navigating the rough seas of preadolescence and her temperamental Jewish family in a lower-middle-income Bronx housing project. Her often violent father, Leo, a self-righteous atheist who craves attention, dreamed of being a great novelist but instead owns a candy store; his casual flirtation with a sultry Jamaican widow threatens to blossom into a full-blown affair. Annette, Emma's migraine-plagued doormat of a mother, can barely remember her younger, prettier, idealistic self as she slaves away in the kitchen, the butt of Leo's tantrums. Emma, a budding poet who prays to the Virgin Mary, inspires intense animosity in her 13-year-old sister, May, which burns with the same red-hot intensity as May's infatuation for a classmate with princely blond good looks and manners very different from the Rosens. An old-fashioned coming-of-age tale, the book soon grows dark with crisis. Eidus illuminates the inner lives of young girls on the cusp of womanhood and demonstrates abundant compassion for her often prickly characters.”
—Publishers Weekly