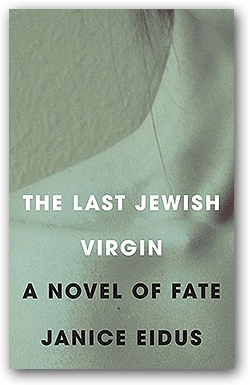 Lilith Zeremba, a young woman rebelling against her intellectually complex, feminist Jewish mother, is The Last Jewish Virgin. In this playful and provocative, sensual and suspenseful novel, Janice Eidus merges the timeless, romantic myth of the vampire with contemporary life in volatile New York City—and beyond. Determined to make her own way—on her own terms—as a successful Jewish woman in the world of fashion, Lilith finds herself in a place where mythology and sexuality collide. She meets two men to whom she is drawn in ways that feel dangerous and yet inevitable: the much older, wildly mercurial and mesmerizing Baron Rock, and Colin Abel, a young, radiant artist determined to make the world a better place, one socially progressive painting at a time. The Last Jewish Virgin, an innovative and universal tale of longing and redemption, refreshes and reinvents the classic vampire myth for a contemporary world in which love, compassion, faith, and politics are forever evolving and intersecting in surprising and original ways.

"... Witty and incisive ... Eidus pours it on in this read-without-stopping tale of Jewish and feminist identities assaulted by raw sexual magnetism and otherworldly powers. A smart, vampy, campy send-up."
—Booklist

"Janice Eidus has written the quintessential New York vampire novel. The Last Jewish Virgin delves head-on into the secret desires of Lilith Zeremba, fashionista and feminist, a good Jewish girl who falls prey to the enigmatic art professor who devours her with his eyes. Sexy and smart, this delicious page turner will suck you in."
—Marcy Dermansky, author of Bad Marie

"There's nothing that I love more than fashion and Jewish humor, and Janice Eidus combines the two in her new novel. Determined to make her own way, Lilith Zeremba is obsessively driven to become a successful Jewish woman in the world of fashion design. To break away from her traditional roots, she attends Bennett Institute of Art & Design. A fabulous love story comes into play when she's drawn to two men that feel dangerous, yet inevitable ... maybe they're goys, the perfect Jewish rebellion. Jew or Goy, Mazel Tov on The Last Jewish Virgin and bringing some eroticism into Judaism."
—VMagazine.com